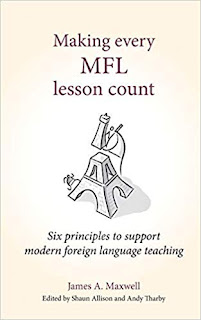 It's surprising how few books there are specifically aimed at MFL teachers, so it is welcome when another one comes along so soon after Dannielle Warren's 100 Ideas book which I recently reviewed here.

The newly published book is by James A. Maxwell a teacher and principal at a school in Northern Ireland. It's from the "Making every... lesson count" series from Crown House Publishing, runs to 168 pages and costs £12.99, or slightly less for the Kindle version.

In his section entitled Final Thoughts, James writes that his book "has endeavoured to demonstrate how current research in cognitive science may translate into the MFL classroom, while also acknowledging that there is a whole separate body of research into the science of second-language learning..." This was worth mentioning, since the reader will find that this informative and partly anecdotal book is primarily influenced by the current educational zeitgeist which is all about cognitive science and the acquisition of knowledge and skills. Readers who are keen on this emphasis will find lots to enjoy in this book, while others who are more in the natural acquisition/communicative camp will find it quite a skewed view of what language learning is about.

So the key influences here are (1) cognitive psychology with its emphasis on models of working and long-term memory, cognitive load, retrieval practice and spaced learning; (2) skill acquisition, as found in different forms in the work of Gianfranco Conti and the Teaching School Council Review of MFL pedagogy (2016) and (3) the Knowledge Organiser approach as used specifically at the Michaela Community School (developed originally by Barry Smith). In addition, James makes more than one reference to the Rosenshine Principles of Instruction, which are also in vogue just now.

So if your cup of tea is explicit instruction, focus on explanation and grammar, careful scaffolding, backed up by structured practice, a good dose of drilling and translation, plenty of modelling of good practice and thorough feedback, including prompt correction, you'll feel at home here. Indeed, I imagine most UK teachers will find plenty they can identify with. Furthermore, it will help if you are working in England, Wales or Northern Ireland since there is frequent reference to GCSE and, to a lesser extent, A-level.

James's book follows the pattern of the others in the series by having six chapters entitled: Challenge, Explanation, Modelling, Practice, Feedback and Questioning. This may have been something of a constraint since the chapter called Explanation was really about other things rather than explanation (which plays a lesser role in MFL than some other subjects). James describes, for example, ways to practise phonics, vocabulary, communicative functions and exploit songs. He might have looked in more detail at the tension between clarity and completeness when explaining grammatical structures. In addition, I would like to have seen some acknowledgment of students' own "built-in syllabus" when it comes to grammar teaching - the fact that learners become ready to acquire new structures at different times and do not internalise items in the order they are taught (a point acknowledged by NCELP).

The final chapter about questions was sound on various aspects such as hands-down questioning and questioning in English about language use, but missed a trick, I thought, in not describing the craft of using the hierarchy of target language question types (often called "display questions") to generate repetitions of language patterns and vocabulary. This is what some teachers call "circling", where you use the full range of questions (yes/no, multi-choice, either/or, Q-word questions) on a piece of text or a picture sequence in an artificial way to recycle your target structures.

Each of the chapters contains useful advice, garnered from considerable personal experience, alongside other selected sources, often from writers associated with the "knowledge based curriculum" movement - writers such as Daisy Christodoulou, Daniel Willingham and Doug Lemov. James quotes from his own lessons, lessons he has observed or imagined, as well as blogs by teachers such as Gianfranco Conti, Jess Lund from Michaela Community School and even myself. The references to cognitive science are very light-touch with barely any detailed description of how working memory and long-term memory are thought to function. There is a slight sense here that the ideas from cognitive psychology have been carried over uncritically into the field of second language acquisition, although to be fair, and as I mentioned at the outset, James does make passing reference in Chapter 2 to the importance of implicit (unconscious) acquisition.

The book could have been more tightly edited here and there, I think. There is the odd error in the French examples used (e.g. "plusieures usines" and the dubious use of "il fait du soleil"), but overall the book is clear, readable and very accessible for language teachers. It would best suit newcomers to the profession, in my view, as long as they combine it with other readings. So all in all, I congratulate James on producing this volume and would recommend the book for the many useful pieces of wisdom it contains, but with the caveat that it is selective and very much "of its time".