The role of phonics teaching

You are probably aware that phonics teaching is all the rage at the moment, at least in the UK. Systematic teaching of sound-spelling correspondences is being encouraged both for first language pupils in primary schools and for second language learners at Key Stage 3. This blog post is an extract from our book Breaking the Sound Barrier: Teaching Language Learners How to Listen (2019) in which we discuss the role of phonics teaching.... 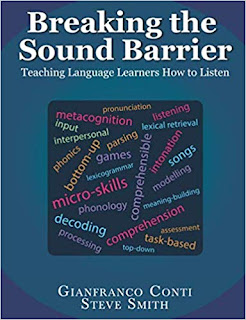 There has been much debate about the value of teaching synthetic phonics (i.e. a structured course of sound-spelling instruction) in L1 teaching during early schooling. Some argue that while phonics teaching may help with recognising and pronouncing isolated words, including invented words (also known in the literature as pseudo-words, nonsense words or non-words), it does little for reading comprehension (e.g. Krashen, 2001, who cites a range of studies) and Huo and Wang (2017) who looked at 15 studies on what they called phonological-based instruction in EFL lessons for primary school children. They found that phonemic awareness and reading of non-words improved, but word recognition and reading comprehension did not. Torgerson et al (2006), in a major meta-study on L1 phonics teaching, concluded that phonics teaching improves reading accuracy, if not comprehension, and recommended that teachers include it “…in a judicious balance with other elements” (p.49). From this it appears that while phonics teaching has benefits, it does not clearly improve L1 reading comprehension.  Can it improve listening performance? Research is unfortunately thin on the ground.

There is good evidence, however, that sounding out whole words makes them more memorable. What psychologists call the production effect suggests that we remember items better when we say them aloud. Forrin and MacLeod (2018) carried out a study to compare how well college students recalled words depending on whether they read them silently, heard someone say them or read them aloud themselves. The words they read aloud themselves were more easily recalled two weeks later. The researchers concluded that when the students spoke the words this provided more engagement with the word, helping to make the words memorable. As they put it: “…oral production is beneficial because it entails two distinctive components: a motor (speech) act and a unique, self-referential auditory input” (from the Abstract).

Other researchers, such as Baddeley, Gathercole and Papagno (1998) have argued that when a student learns a new word it needs to be repeated aloud in order for sounds to be assigned to the word, a process which helps the word find its way into long-term memory. Woo and Price (2015) have suggested that if students are not given the chance to say a word or phrase several times they may assign the wrong sounds to the word before it is transferred to long-term memory. Service (1992) found that phonological short-term memory (reflected in the ability to repeat words accurately, i.e. being a good mimic) correlates with future L2 learning performance.

Finally, an influential review of language teaching pedagogy in England by The Teaching Schools Council (Bauckham, 2016), which involved observations of lessons and interviews with teachers, strongly recommended a planned approach to the teaching of phonics.

With this type of evidence in mind, together with our own long experience as teachers, a number of general points can be made:

·    L2 phonology differs from L1 and students often apply their existing knowledge of L1 phonics to L2. This leads to poor pronunciation and a greater likelihood that words will not be recognised in speech. It is therefore important to model correct pronunciation and sound-spelling links, and have students shadow it, i.e. say or whisper it out loud after you.

·   Although sound-spelling links will become established through general work in the four skills, students will benefit from being taught explicitly which sounds and syllables correspond to which spellings, notably where these spellings are in contrast to the L1 orthography. This may be of particular benefit to lower-attaining students.

·    Language-specific issues may need special treatment, e.g. ‘silent letters’ and elision in French or the role of accented characters in French, German and Spanish.

·    Although perception tasks such as distinguishing between minimal pairs (e.g. in French des chats versus déjà) are useful, saying sounds and words aloud adds an extra element in reinforcing memory. If we train students in accurate repetition this will help with their general proficiency.

·    Rather than prepare a time-consuming structured phonics programme which has the potential to be tedious for students, we recommend you intersperse your other communicative work with short bouts of phonics practice. But keep in mind the areas which will cause most difficulty for your students. Whether teachers deal with phonics in a systematic or more incidental manner may depend on their preference or practical issues such as time available.

·   Pronunciation of segments longer than individual phonemes is likely to be more engaging for students. Adding meaning to a task makes it more enjoyable as well as productive.

August 06, 2016
The natural order hypothesis states that all learners acquire the grammatical structures of a language in roughly the same order. This applies to both first and second language acquisition. This order is not dependent on the ease with which a particular language feature can be taught; in English, some features, such as third-person "-s" ("he runs") are easy to teach in a classroom setting, but are not typically fully acquired until the later stages of language acquisition. The hypothesis was based on morpheme studies by Heidi Dulay and Marina Burt, which found that certain morphemes were predictably learned before others during the course of second language acquisition. The hypothesis was picked up by Stephen Krashen who incorporated it in his very well known input model of second language learning. Furthermore, according to the natural order hypothesis, the order of acquisition remains the same regardless of the teacher's explicit instruction; in other words,
Post a comment
Read more

January 15, 2019
Image: pixabay.com What is “delayed dictation”? Instead of getting students to transcribe immediately what you say, or what a partner says, you can enforce a 10 second delay so that students have to keep running over in their heads what they have heard. Some teachers have even used the delay time to try to distract students with music. It’s an added challenge for students but has significant value, I think. It reminds me of a phenomenon in music called audiation. I use it frequently as a singer and I bet you do too. Audiation is thought to be the foundation of musicianship. It takes place when we hear and comprehend music for which the sound is no longer or may never have been present. You can audiate when listening to music, performing from notation, playing “by ear,” improvising, composing, or notating music. When we have a song going round in our mind we are audiating. When we are deliberately learning a song we are audiating. In our language teaching case, though, the
5 comments
Read more

What is "Input Processing"?

December 31, 2017
Input Processing (IP) was proposed by Bill VanPatten, Professor of Spanish and Second Language Acquisition from Michigan State University. Bill may be known to some of you from his podcast show Tea with BVP. He is one of those rare university academics who makes a specific effort to engage with practising teachers. IP was first proposed in a 1993 article (published with T. Cadierno in the Modern Language Journal) entitled "Input processing and second language acquisition: A role for instruction." My summary of it is based on an article "Input Processing and Processing Instruction: Definitions and Issues" (2013) by Hossein Hashemnezhad. IP is a little complicated to explain, but I'll do my best to summarise the key points before suggesting how it relates to other ways of looking at classroom language teaching. Is this actually any use to teachers? I apologise in advance for over-simplifying or misunderstanding. To paraphrase Dr Leonard McCoy from Star Trek &q
Post a comment
Read more

February 20, 2020
Some teachers have cottoned on to the fact that sentence builders (aka substitution tables) are a very useful tool for helping students prepare for their GCSE speaking and writing tests. My own hunch is that would help for students of all levels of proficiency, but may be particularly helpful for those likely to get lower grades, say between 3-6. Much depends, of course, on how complex you make the table. To remind you, here is a typical sentence builder, as found on the frenchteacher site. The topic is talking about where you live. A word of warning - formatting blogs in Blogger is a nightmare when you start with Word documents, so apologies for any issues. It might have taken me another 30 minutes just to sort out the html code underlying the original document. Dans ma ville (in my town) Dans ma région (In my area) il y a (there is/are) des banques (banks) des cafés (cafes) des
2 comments
Read more

May 05, 2018
Most teachers have made frequent use of pair and group work for many years, notably since the rise of communicative language teaching in the 1980s. Even before then it would have been common for pupils to work in pairs on simple role-play and dialogue tasks. So pair and group work is standard practice, if not universally supported by language teachers. It’s always worth evaluating, however, whether a practice works - whether, in this case, it helps students develop their proficiency. Pros Rod Ellis (2005) summarises the advantages of pair/group work (based on Jacobs, 1998) “1. The quantity of learner speech can increase. In teacher-fronted classrooms, the teacher typically speaks 80% of the time; in groupwork more students talk for more of the time. 2. The variety of speech acts can increase. In teacher-fronted classrooms, students are cast in a responsive role, but in groupwork they can perform a wide range of roles, including those involved in the negotiation of meaning. 3. There can
Post a comment
Read more