"Nobody talks about happiness" 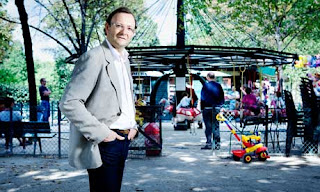 Peter Gumbel, lecturer in the school of journalism, Sciences Po.   Photo: Lea Crespi for the Observer

Interesting piece in today's Observer newspaper, drawing on a book published this week by British lecturer and journalist Peter Gumbel who works at Sciences Po in Paris. His book entitled On achève bien les écoliers? (Grasset) attacks the French education system for failing to build the self-esteem of French children. Nobody seems to talk about the happiness of children in schools. Whilst he agrees that the system has avoided "dumbing down" (unlike, he claims, the British system), it has been too negative towards children and makes them feel they are useless. French schoolchildren feel anxious, stressed and are frightened to speak out in class for fear of looking silly. He also mentions how poorly France trains its teachers (see my previous post) and seems to have forgotten that the basis of any good school is good teachers.

Anyway, here's the piece. Worth a look.

I guess it's hard to make a judgement on this as a virtual outsider, though his conclusions do not surprise me a bit. Pastoral support is not as well developed as in the UK, the curriculum encourages a "mug and jug" approach ("un style magistral"), extra-curricular activities are relatively limited, teachers are poorly trained and pressures on children are high. Teachers often complain that their schemes of work are "surchargés". Just as we are obsessed by our targets, league tables and grades, the French still over-value the mark out of 20 and the "moyenne". On the other hard, accountability is very limited when compared to the British system. If French teachers had to deal with our performance management system they would go on strike even before a hat was dropped.

And it's not as if standards are especially high. Despite what it says in the Observer article, international comparisons, for what they are worth, are not very flattering for the French.

Looks like the Observer and the Nouvel Obs are the only publications to latch on to this story so far. For more detail and comments see:

Are countries introspective when it comes to their education systems? We could learn so much from each other.