June 01, 2016
This referendum has me very worried. I hope a majority of the country sees sense on June 23rd. The sweep of history is for us to be part of a cooperative Europe, not standing on the sidelines or, worse, provoking a gradual disintegration and return to the bickering and conflicts of the past. We should not forget the contrast between how Europe has been for most of its history and how it has been since 1945.

If we vote leave I see a government led by Johnson or May, an economy in shock, a rise in intolerance and xenophobia, a cabinet full of Brexit campaigners, years of negotiations ending with the UK in a single market without a say in decisions, possible threats to workers' rights, an independent Scotland and destabilised Europe with who knows what consequences in the long term.

This was posted on Facebook. If you have any doubts about how to vote, you might find it useful. It's hard to fault. 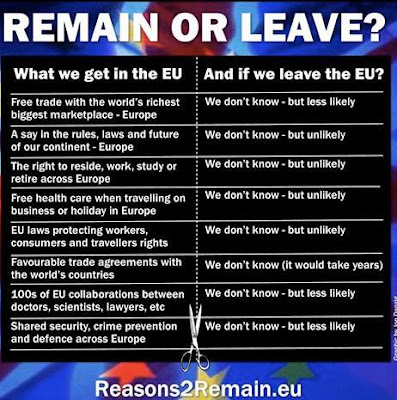