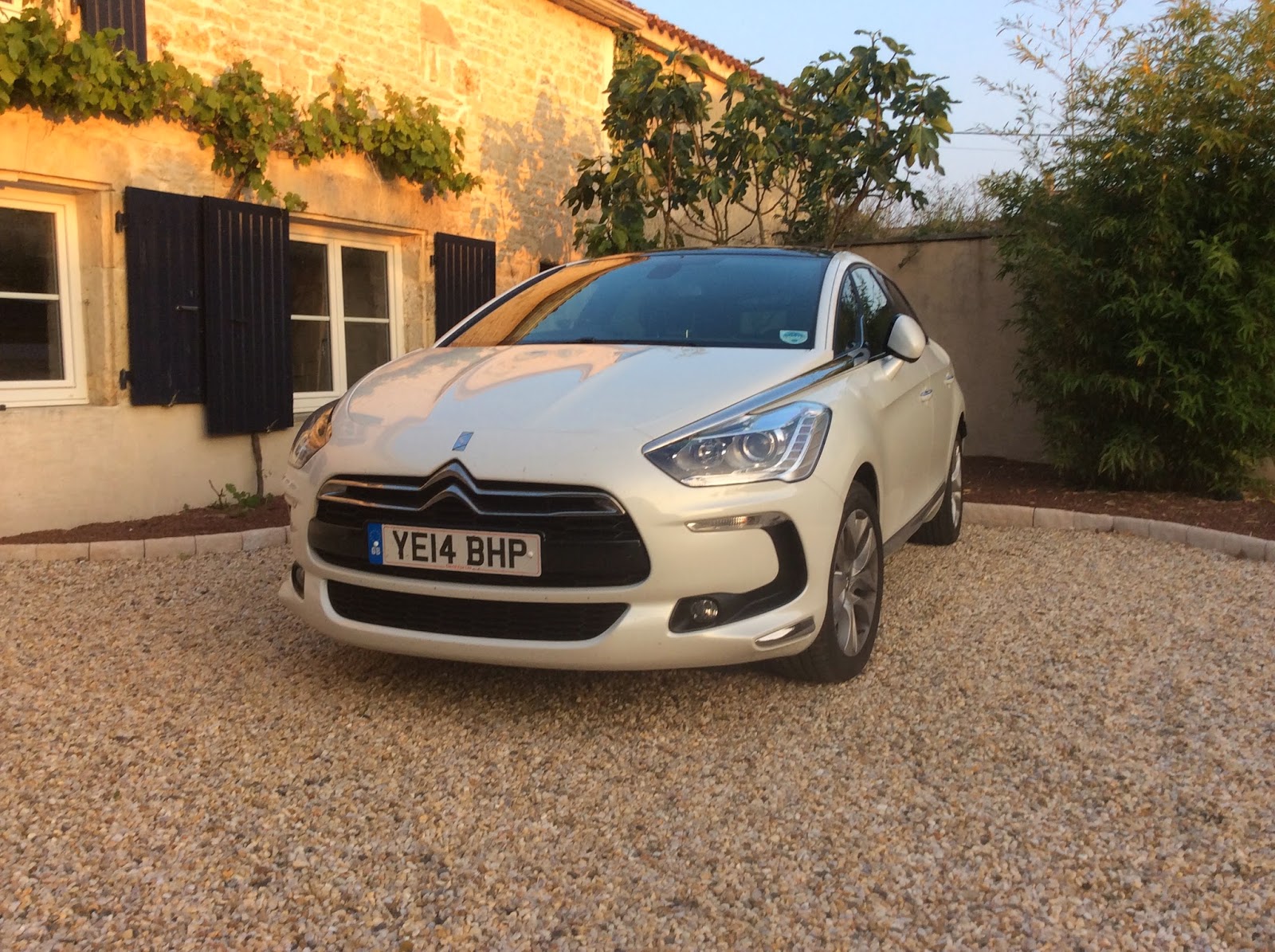 Sam Wollaston eat your heart out, here is my review of the Citroën DS5, the third in line in Citroën's DS range.

Having owned many Citroëns over the years, but never, alas, their two most iconic cars, the original DS and the 2CV, I had been lusting after the DS5 for some time. About five weeks ago we bought a new one, in the process destroying any environmental credentials we may have had.

The French president rides in one. We also know that the roof is too low for the Queen's hats. What's the DS5 like?

As a car it's hard to categorise. It's on the large side, but shorter than a standard BMW 3 series saloon. It is unique in design, like a cross between an estate and an oversized hatchback. It shares design clues with its smaller sibling, the popular DS3. It sits relatively high off the ground, has a cluttered but bold and rounded nose, handsome creases and chrome along the side and particularly good-looking rear quarters which, with the roof sloping down to a two part, slim rear glass area, faintly echo the original DS. The most striking and original piece of exterior design flair are the two chrome "sabres" which run from each headlight alongside the bonnet and right up to half way up the front side windows.

The body is full of interesting creases, cut-outs and hollows, some of which, again, are taken from the DS3. Most people agree this is a very handsome and original car, a bold, futuristic design and one which could in time become iconic. In my opinion, white suits the car best, especially the optional pearlescent white. It reinforces the contrast between the black glass roof and the rest of the body. It's a reminder of the days of vinyl roofs when drivers appreciated a contrast between roof and body. 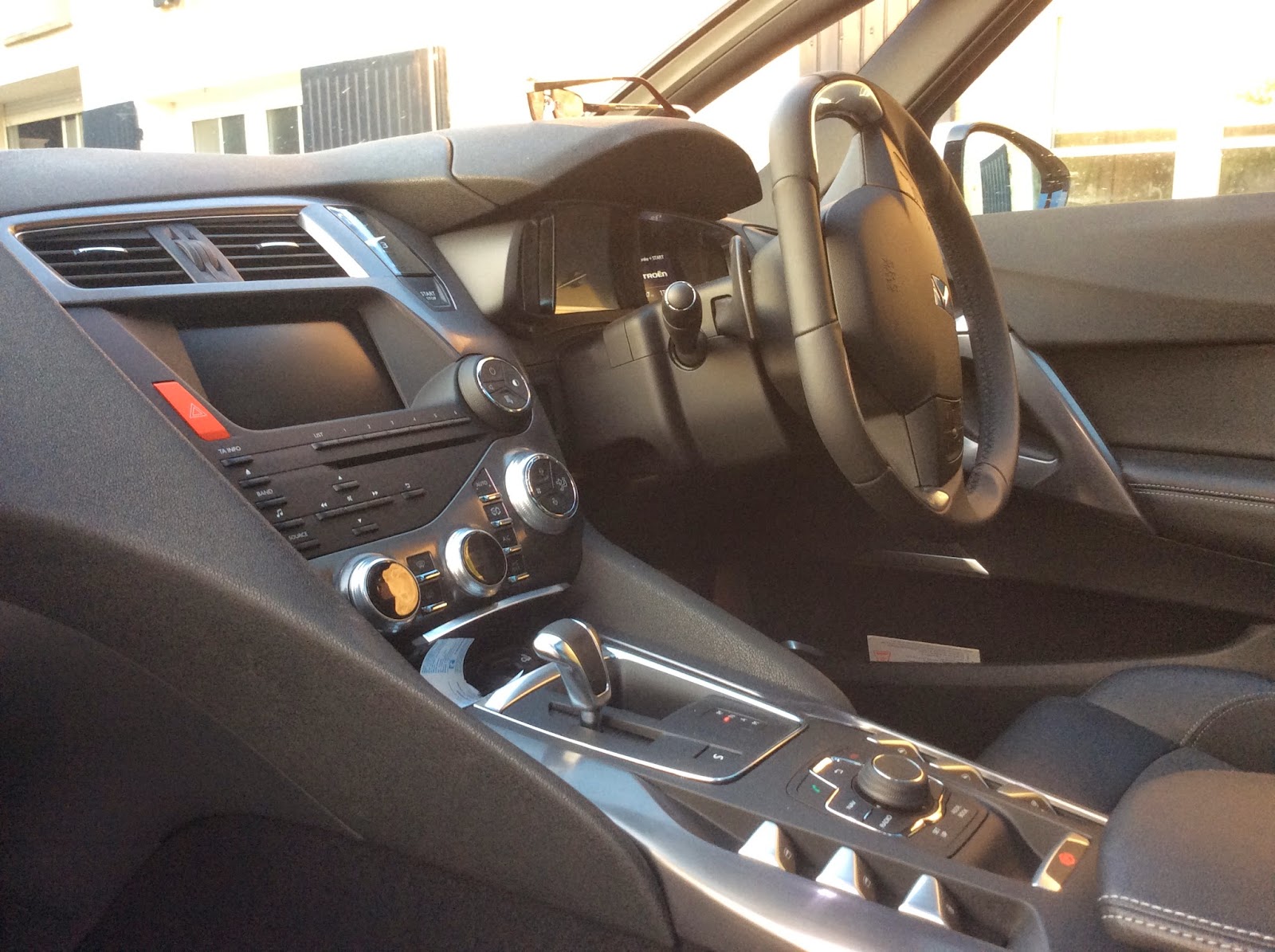 Inside, once again, the designers were given their head. The driver sits in a aircraft cockpit style cabin, slightly claustrophobic, but lightened by the three separate sunroofs, one for each front seat passenger, one shared by the rear passengers. The dashboard is a  very contemporary, yet analogue, array of trapezoidal shapes, smart switches and dials, brushed mid grey aluminium, high grade soft touch blacks and flashes of chrome or polished aluminium. I like the addition of an analogue clock - it's pure design and totally superfluous sitting as it does next to the GPS/radio screen which features a digital clock.

The seats, finished in leather and cloth, are very comfortable and fashionably on the firm side. Almost all the usual accoutrements are present. On the D Style version you get satnav, rear parking sensors, rear view camera, cruise control and plenty more. The car has keyless entry so you can just leave your keys in your pocket all the time. Don't worry, you cannot inadvertently lock them in the car. Storage is not bad, the best bit being a sizeable area between driver and passenger beneath the arm rest. You also get, unusually, overhead storage for sunglasses and small items and switches for the sunroof blinds. At night the dashboard colours are predominantly red and white, not the cosy, traditional oranges of a BMW. This gives the interior a contemporarily industrial, yet cosseting feel.

Mechanically my car features the tried and tested 1.6 hdi engine familiar in Peugeots, Citroëns and Fords. It's powerful enough (115 bhp) and is mated, in this case, to the semi-auto gearbox which many have criticised. I rather like it. You can leave it in auto, but you will feel gear changes (no worse than manual changes), or you can change gear using paddles just beneath the steering wheel. This type of gearbox is as economical as a manual, easier to use and at least as smooth as a manual. The engine is generally hushed, pulls very well above about 1500 rpm, but is a bit raspy when cold.

What about the ride and handling? Well, most reviewers have criticised the overly firm and jittery ride. The latest version of the DS5 comes with new, more compliant shock absorbers. This has improved matters, but the ride remains on the firm side and the car does not have the traditional Citroën ability to smooth out bumpy British roads, even on the smaller 17 inch alloys with high profile tyres. In addition, the suspension gets noisy when you hit a sudden imperfection in the road surface. The flip side is that the car is quite fun to handle, but I have to say that I would have preferred the cushier, self-levelling gas suspension which Citroën has done so well over the years. But Citroën wanted this car to be dynamic and more German in feel. This is part of the DS brand ( the DS3 and DS4 have firm set-ups) and Citroën have been keen to poach some drivers looking for something different from German brands. The other fact is that firm suspension is just in fashion.

So far I have been getting between 47 and 58 mpg. On mixed driving this should settle down to around 50 mpg when the diesel engine is properly run in.

I love this car. It's different. There is nothing quite like it on the road. I love looking at it and sitting in it. My wife thinks it's much more fun than our old C5, itself a handsome car in an elegant Franco-German kind of way. The DS5 is good to drive, but I do wish it rode with more aplomb on bumpy surfaces. Oh, and it's not cheap! 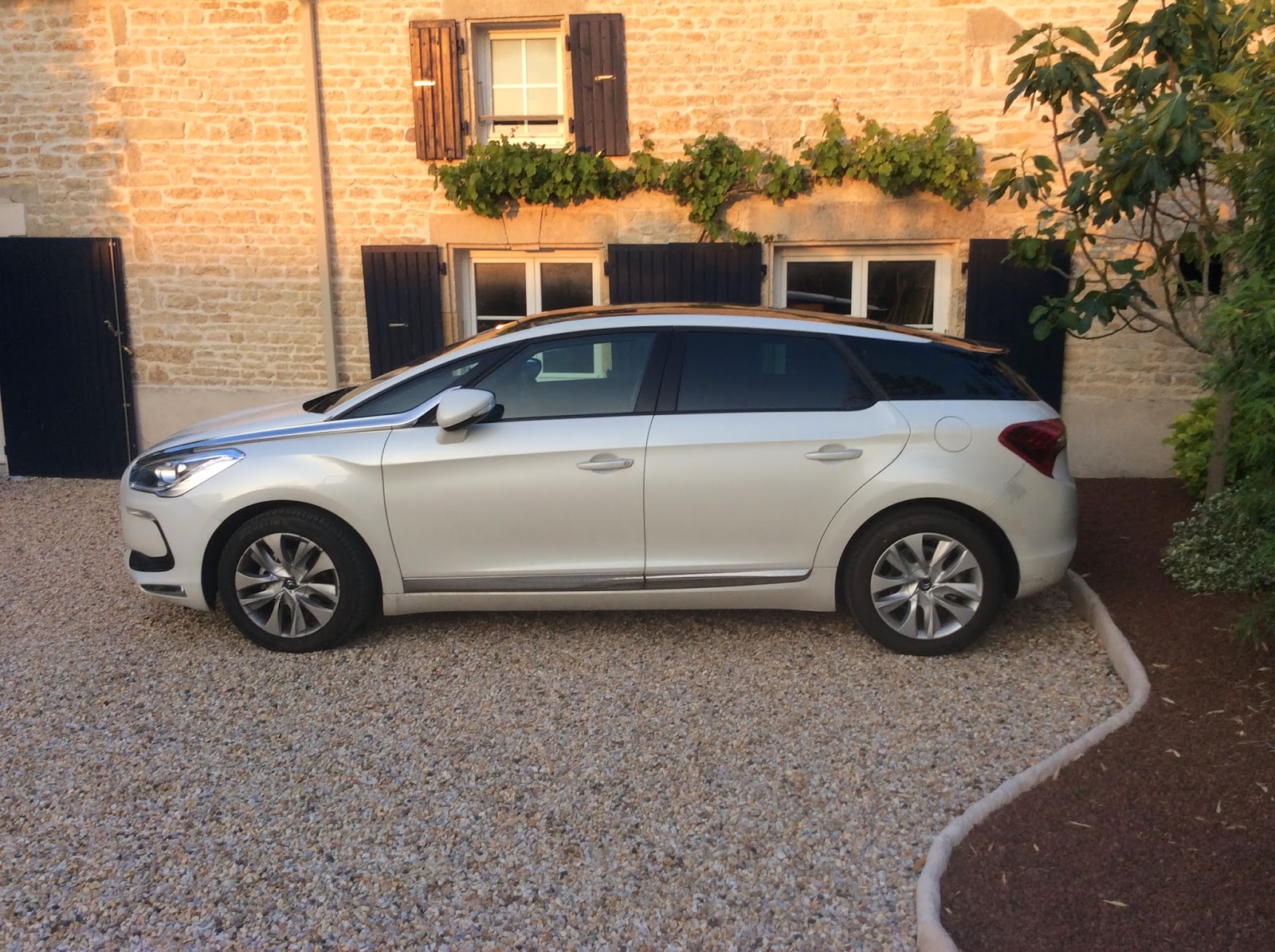 August 06, 2016
The natural order hypothesis states that all learners acquire the grammatical structures of a language in roughly the same order. This applies to both first and second language acquisition. This order is not dependent on the ease with which a particular language feature can be taught; in English, some features, such as third-person "-s" ("he runs") are easy to teach in a classroom setting, but are not typically fully acquired until the later stages of language acquisition. The hypothesis was based on morpheme studies by Heidi Dulay and Marina Burt, which found that certain morphemes were predictably learned before others during the course of second language acquisition. The hypothesis was picked up by Stephen Krashen who incorporated it in his very well known input model of second language learning. Furthermore, according to the natural order hypothesis, the order of acquisition remains the same regardless of the teacher's explicit instruction; in other words,
Post a comment
Read more

What is "Input Processing"?

December 31, 2017
Input Processing (IP) was proposed by Bill VanPatten, Professor of Spanish and Second Language Acquisition from Michigan State University. Bill may be known to some of you from his podcast show Tea with BVP. He is one of those rare university academics who makes a specific effort to engage with practising teachers. IP was first proposed in a 1993 article (published with T. Cadierno in the Modern Language Journal) entitled "Input processing and second language acquisition: A role for instruction." My summary of it is based on an article "Input Processing and Processing Instruction: Definitions and Issues" (2013) by Hossein Hashemnezhad. IP is a little complicated to explain, but I'll do my best to summarise the key points before suggesting how it relates to other ways of looking at classroom language teaching. Is this actually any use to teachers? I apologise in advance for over-simplifying or misunderstanding. To paraphrase Dr Leonard McCoy from Star Trek &q
Post a comment
Read more

January 15, 2019
Image: pixabay.com What is “delayed dictation”? Instead of getting students to transcribe immediately what you say, or what a partner says, you can enforce a 10 second delay so that students have to keep running over in their heads what they have heard. Some teachers have even used the delay time to try to distract students with music. It’s an added challenge for students but has significant value, I think. It reminds me of a phenomenon in music called audiation. I use it frequently as a singer and I bet you do too. Audiation is thought to be the foundation of musicianship. It takes place when we hear and comprehend music for which the sound is no longer or may never have been present. You can audiate when listening to music, performing from notation, playing “by ear,” improvising, composing, or notating music. When we have a song going round in our mind we are audiating. When we are deliberately learning a song we are audiating. In our language teaching case, though, the
5 comments
Read more

February 20, 2020
Some teachers have cottoned on to the fact that sentence builders (aka substitution tables) are a very useful tool for helping students prepare for their GCSE speaking and writing tests. My own hunch is that would help for students of all levels of proficiency, but may be particularly helpful for those likely to get lower grades, say between 3-6. Much depends, of course, on how complex you make the table. To remind you, here is a typical sentence builder, as found on the frenchteacher site. The topic is talking about where you live. A word of warning - formatting blogs in Blogger is a nightmare when you start with Word documents, so apologies for any issues. It might have taken me another 30 minutes just to sort out the html code underlying the original document. Dans ma ville (in my town) Dans ma région (In my area) il y a (there is/are) des banques (banks) des cafés (cafes) des
2 comments
Read more

May 05, 2018
Most teachers have made frequent use of pair and group work for many years, notably since the rise of communicative language teaching in the 1980s. Even before then it would have been common for pupils to work in pairs on simple role-play and dialogue tasks. So pair and group work is standard practice, if not universally supported by language teachers. It’s always worth evaluating, however, whether a practice works - whether, in this case, it helps students develop their proficiency. Pros Rod Ellis (2005) summarises the advantages of pair/group work (based on Jacobs, 1998) “1. The quantity of learner speech can increase. In teacher-fronted classrooms, the teacher typically speaks 80% of the time; in groupwork more students talk for more of the time. 2. The variety of speech acts can increase. In teacher-fronted classrooms, students are cast in a responsive role, but in groupwork they can perform a wide range of roles, including those involved in the negotiation of meaning. 3. There can
Post a comment
Read more