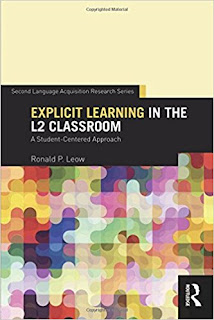 A scholarly, highly referenced and occasionally entertaining book about the importance of awareness (consciousness?) in language learning and teaching, providing a detailed theoretical and research background to such notions as consciousness, attention, information processing, input, intake, working and long term memory, and learning itself. This is detailed material, tough at times (because of the subject matter), but sweetened by the author's lucid style, occasional use of metaphor for the benefit of readers without a research background, and his own acknowledgment of the complexity of the field (Leow is both a teacher and researcher).

One of my interests in reading this book is finding specific classroom ideas that language teachers may find immediately useful. On this point teachers may end up feeling short-changed.

But first, in Leow's own words:

This is "...a book that provides a theoretically grounded and empirically supported approach to the promotion of explicit learning, that is, learning with awareness, in L2 development with a direct connection to learning in the classroom setting." (p. xiii)

Leow's starting and finishing point is that learning a second language is not the same as learning your first (the classroom is not like real life), nor is it about justifying the teaching of grammatical rules. The poverty of time and stimulus in the classroom calls for an approach which both takes advantage of input and paying attention to form. This grabbed my "attention" (Leow jokes about the this word, as well as the word "awareness", the definition of which is complicated) since my gut feeling after years of teaching and a modicum of reading is that second language learning is very complex and cannot be reduced to one particular ideological view. In short: "It is a book on learning, a process that involves quite a lot of processing and potential learner awareness while interacting with the L2 inside and outside the classroom setting." (ibid)

One area the book dwells on to a considerable extent is the relative effectiveness of explicit and implicit learning. The latter is described as "learning without awareness of what is being learned or intent to learn it." (Thorndike and Rock, 1934).

Although Leow writes: "Whether the role of consciousness/awareness is crucial for further processing to take place and, ultimately, for learning has been and will remain a contentious issue." (p.58) he cites empirical research to argue that explicit learning is more important in the classroom. He invokes for example the Schmidt Noticing Hypothesis: "more noticing leads to more learning" (1994) but acknowledging that noticing is not necessarily required for learning. (We know that some people acquire languages in immersion settings without necessarily doing much "noticing" of grammatical form, for example.)

In Chapter 11 Leow examines the concept of depth of processing - a key to his own tentative model of classroom language learning.  He writes: "If one were to process incoming information at a deeper level, that is, employ greater cognitive effort during processing while using prior knowledge to strengthen the process, the chances of remembering such information are substantially increased ." (p. 205).

(An example of deeper versus shallower processing in the languages classroom might be reading a text and answering questions, requiring both comprehension and production skills. A shallower task would be filling gaps in a paragraph with options provided. The former activity is likely to require more cognitive effort, provided the difficulty level is appropriate.)

With regard to deep processing and vocabulary acquisition, Leow cites Hulstijn (2001) who argued "processing new lexical information more elaborately (e.g. by paying attention to the word's pronunciation, orthography, grammatical category, meaning and semantic relations to other words) will lead to higher retention than by processing new lexical information less elaborately (e.g. by paying attention to only one or two of these dimensions" (p.270). This has been called the Involvement Loading Hypothesis (Laufer and Hulstijn, 2001).

Chapter 13 takes a look at how using "e-tutors" (online interactive tasks which provide feedback to encourage deeper processing) could be a way forward for language teaching with technology. After some (limited) empirical support for CALL (Computer Assisted Language Learning) is offered, a maze-based game is described where students translate sentences into Spanish, working through levels and winning money along the way. Feedback designed to encourage deeper processing is provided along the way. When students enter their answers the feedback might be "Why is this not right? What do you think the subject of the verb gustar?"  I found this chapter disappointing, after all the detailed background about input processing, having hoped for something more interesting and original with regard to classroom pedagogy. The concluding chapter doesn't take us much further really, with Leow proposing a hybrid classroom, where students bring their own knowledge to the classroom (with the aid of technology no doubt) and teachers provide well-designed tasks and activities and the opportunity to practise the language. Leow is somewhat enamoured with new technology and he may be right that this will play a growing role, including using interactive VR to enhance language learning.

In conclusion, this book should be of most interest to students to doing applied linguistics degrees or a Masters qualification, scholars in the field or teachers with a particular interest in developing their background knowledge of research. It would be a good antidote for teachers or teacher-researchers who believe classroom language acquisition can be boiled down to a simple theory.  Of interest is the fact that, while Leow does not in general support the Stephen Krashen view of natural second language acquisition (still popular with many teachers, notably in the USA), he is generous in his praise for Krashen for having stimulated so much subsequent research.

Hulstijn, J.H.  (2001). Intentional and incidental second language vocabulary learning; A reappraisal of elaboration, rehearsal and automaticity. In P. Robinson (ed.)  Cognition and second language instruction, Cambridge, CUP.
Laufer, B.  and Hulstijn, J.H. (2001). Incidental vocabulary acquisition in a second language: The construct of task-induced involvement. Applied Linguistics, 22 (1), 1-26.
Thorndike, E.L. and Rock, R.T. (1934). Learning without awareness of what is being learned or intent to learn it. Journal of Experimental Psychology, 17, 1-19.