September 25, 2011
Just watched Claude Berri's Germinal with my A-level class and enjoyed it very much. One of two of my more squeamish students found certain scenes shocking, but I am sure their eyes were opened to a different world. Having seen the film some years ago, I was struck this time how powerfully it presented the cruelty of miners' lives, how heavy-handedly, yet effectively, it contrasted this life with the bourgeoisie who ran the mines and how honestly Berri was willing to depict the bestial behaviour of working people subject to this environment. He was only rendering faithfully Zola's novel, and I did read comments to the effect that Berri did not emphasise enough the political struggle of the miners, but I did not have that feeling.

The film is shocking in its naturalism, well acted, particularly by Depardieu, Miou Miou and Jean-Roger Milou who gives an outstandingly committed performance as the frightful Chaval. Judith Henry is frail and touching in her role as Catherine, though I was left unconvinced by Renaud as Etienne Lantier. Just one too many close-ups of his emotionless facial expression for my taste. 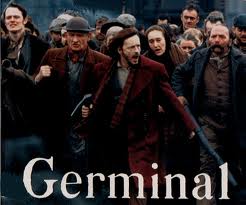 So I do not believe this should be seen condescendingly as a high budget "heritage movie", devoid of creativity or political commitment. It is a very powerful and enduring indictment of a system which debased both workers and the men who employed them. It is also a striking reminder of class differences which, though less stark these days, still persist.